This is an extract from an earlier post: Lies, Damned Lies, and .. Political Rhetoric, 2016, post-Brexit, and the lies told for a political agenda.

Here’s James O-Brien on Amber Rudd’s speech at the Conservative party conference: this clip. Have a listen, it’s worth it.

Just a bit of angry rhetoric? Not quite. Here’s the text of what he said. First, the opening from the LBC web page:

This startling observation stopped James O’Brien in his tracks – the eerie similarities between Amber Rudd’s plan to list foreign workers and a passage in Mein Kampf.

So, what did O’Brien say? Well, here it is. But bear in mind that Rudd said nothing like this, didn’t say a thing about lists, about a nations existence and greatness, a sharp line of distinction, didn’t give an anecdote about a plasterer, … And yet O’Brien re-reads this in parts, emphasising the meanings from Mein Kampf, with not a jot from Rudd’s speech.

You have to have a sharp line of distinction between those who are members of the nation and those who are just domiciled here as earners of their livelihoods.”

A sharp line of distinction between those who as members of the nation are the foundation and support of its existence and those who are domiciled in the state simply as earners of their livelihood here. Do you recognise that need for a sharp distinction? Do you feel it? Do you applaud that today?

Do you cheer it because you’ve heard some meaningless anecdote about plasterer whose wages have gone up by roughly the same percentage over the last ten or fifteen years that almost everybody else in the British workforce has? You see the need for that sharp line of distinction? Are you going to swallow that today?

A sharp line of distinction between those who are the foundation and support of the nation’s existence and greatness. And those, like almost everybody I’ve encountered so far today, who were just domiciled in the states simply as earners of their livelihood here. What do you think will come next?

If you’re going to have a sharp line of distinction between people born here and people who just work here, you’re enacting chapter two of Mein Kempf. Strange times.

“sharp line of distinction” – quoted once from Mein Kampf, and then repeated four more times. Who would come away from this thinking that phrase wasn’t part of Rudd’s speech?

This is like reading Dr Martin Luther King Jr’s speech and presenting it as Malcom-X. No. It’s worse than that. Because despite the differences, at least King and Malcom-X were on the same subject. This Holocaust precursor from Hitler was actually about hate and demonisation. Nowhere did Rudd demonise or even criticise foreign workers in her speech. What criticism she did include was entirely about the current UK methods of managing foreign workers. This is a particular malicious and dishonest clip from O’Brien – and plenty of people have bought it hook line and sinker.

Citing and re-citing phrases from Mein Kampf and playing on those words and meaning as if they are Rudd’s, is a straw man argument clearer than many I’ve seen for a long time.

By all means disagree with the policy, but at least criticise the policy and not some trumped up misrepresentation.

It’s difficult to emphasise how bad this is. His repeat of the “sharp line of distinction” very specifically gives the impression it’s in Rudd’s speech. I’ve seen this clip posted on a Lib Dem Facebook page a few times, and people are buying it, reposting it, and becoming outraged at the ‘fact’ that Rudd is a Nazi.

At this point it’s worth looking at a tweet from O’Brien:

What’s really ugly is the pundits and politicos who are informed enough to understand all this still telling lies to people who trust them.

No kidding. I’ve added the twitter ‘exchange’ below as an update. Won’t defend his own misrepresentations but happy to point it out in others.

I’m not kidding about this. Some people are seriously claiming the Tories are fascists, and it isn’t being used metaphorically. A UK elected government, that will abide by UK election rules and hand over power if they lose the next election, that have none of the actual features of actual fascist governments.

Let’s have a look at what Rudd actually said in this context of foreign workers.

I believe immigration has brought many benefits to the nation. It has enhanced our economy, our society and our culture.

This is why I want to reduce net migration while continuing to ensure we attract the brightest and the best.

Because it’s only by reducing the numbers back down to sustainable levels that we can change the tide of public opinion … so once again immigration is something we can all welcome.

The test should ensure people coming here are filling gaps in the labour market, not taking jobs British people could do.

But it’s become a tick box exercise, allowing some firms to get away with not training local people. We won’t win in the world if we don’t do more to upskill our own workforce.

Labour and Lib Dems (I’m a member of the latter) have not been shy about demanding better education and training of our young people, and have been quick to complain about the lack of training. The current system sees some employers using foreign workers when they should be training British people. Note that this is necessary for British competitiveness – something Labour and Lib Dems sign up to.

These are not controversial points from Rudd. Prior to Brexit and Syria and Merkel’s cock up, this could have come from any of the major parties, not just UKIP. Labour and Tories have lower immigration targets.

The O’Brien misrepresentation and his responsibility for its spread on social media is the only controversial issue here.

I dropped the above criticism in O’Brien’s Twitter stream once or twice soon after I posted it here and had no reaction from him – O’Brien owes me nothing, fair enough. I’ve posted it elsewhere, but I haven’t trolled O’Brien with it. Then I saw this retweet of an O’Brien tweet … 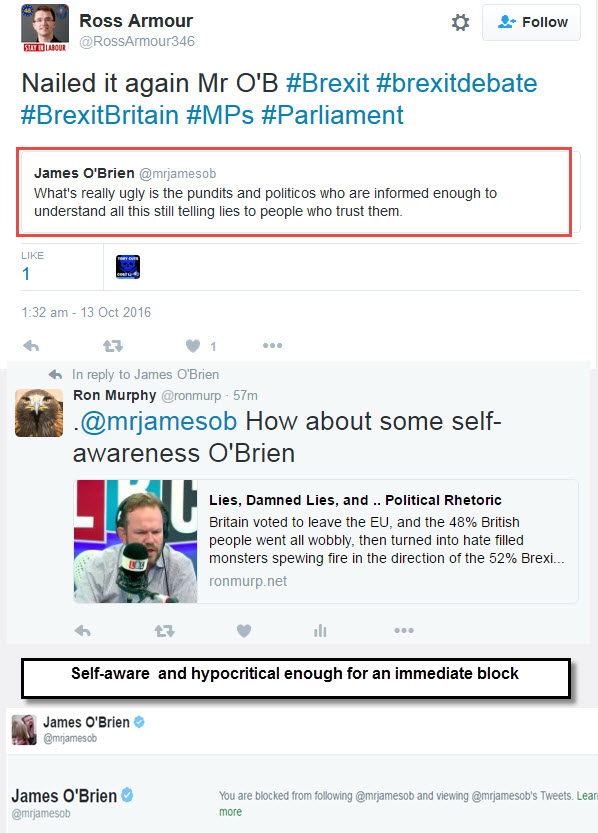 I’d like to think his blocking me was out of shame for his own dishonesty, but I doubt it.