So, in response to the Oregon shootings, this was Myers: Is atheism bankrupt?

We had another mass murder in America this week, and there’s no way around it: it was by a “none”, someone who hated organized religion, and who described himself as Not Religious, Not Religious, but Spiritual. If he were participating in a survey, we’d embrace him as one of us, part of our growing majority.

Well, that’s right, we might, with regard to his rejection of organised religion. He would be a contribution to the statistics of the increase in irreligion (as all we atheists are). But I’m guessing that doesn’t make him ‘one of us’ in the way Myers intends. Because that would be the dreaded ‘dictionary atheism’.

I agree completely with Ashley Miller’s point that the myth of atheist superiority is dangerous, and leads to terrible consequences.

I disagree, particularly with respect to this killing, and the Hicks case.

But let’s not fool ourselves that this is really about atheism. I could give Myers some wiggle room, considering the recent trauma of the self-inflicted implosion in that corner of FtB over the Benson affair, I suppose he’s a little disillusioned by it all, and said as much in a recent post. But never mind, he’s not about to miss an opportunity to take up Miller’s thinly disguised attack on New Atheists. Myers is far more explicit. None of the ‘best selling atheist authors’ bollocks. right out with it. It’s the fault of Sam Harris.

But of course, some of our self-appointed ‘leaders’ want nothing to do with that. It never fails that if you want to see the insufferable smugness of delusional atheists, all you have to do is turn to Sam Harris.

I’ll repeat here the quote of Harris that Myers uses, because it’s worth reading in its own right:

No rational atheist (or “New Atheist”) holds religion accountable for every idiotic or unethical thing religious people do. We blame a religion only for what its adherents do as a direct result of its doctrines, such as opposing gay marriage or killing apostates.
Atheism has no doctrines. It does not demand that a person do anything, or refrain from doing anything, on the basis of his unbelief. Consequently, to know that someone is an atheist is to know almost nothing about him—apart from the fact that he does not accept the unwarranted claims of any religion.
Atheism is simply the condition of not believing in Poseidon, Thor, or any of the thousands of dead gods that lie in the graveyard we call mythology. To that extent, everyone knows exactly what it is to be an atheist—he has simply added the god of Abraham to the list of the dead.
If a belief in astrology were causing people to go berserk—to deny medical care to their children or to murder unbelievers—many of us would speak and write about the dangerous stupidity of astrology. This would not be bigotry or intolerance on our part. It would be a plea for basic human sanity. And that is all that an atheist’s criticism of religious tribalism and superstition ever is.
If you understand this, you will recognize any attempt to blame atheism for specific crimes, great or small, for what it is: A fresh act of religious demagoguery.

And what does Myers have to say to this?

Myers gives a quick statement on his position on religion, which doesn’t exactly contradict any of the above from Harris. He even says:

I am all in favour of tearing it down and replacing it with…what?

New Atheism? Yes, .. err, … no, Myers accepted then rejected that. Atheism+? Well, sorta, but now denies his interest in that. Social Justice? Well, who wouldn’t be for social justice? Hey, Harris is a humanist, and goes for social justice too? I know, we can replace religion with Humanism! Has Myers not considered that?

… and replacing it with…what? According to Harris, nothing.

Well, that’s a damned lie, right there, isn’t it. We know it is. But Myers and his comment crew will keep pushing this theme. So, Harris writes a book on morality, espousing humanist principles, chats to Maher on his show about humanist liberal principles, states it clearly all over his books, articles and appearances. So, why does Myers think Harris offers nothing?

Atheism has nothing constructive or productive to replace the bad system most people are limping along under — rip it all out and apparently, brute reason can then be trusted to evolve something better.

Yes, Myers is actually right here in his rhetorical mockery of the quote from Harris. Myers denounces ‘dictionary atheism’ because Myers has his head stuck up his ass trying to find his own identity in the ‘atheist community’. That’s the problem Myers has been suffering from. He’s searching for something more, within atheism, and he’s looking in the wrong place.

I follow a few football sites on Facebook (proper football, played with your feet) and on one of them some thoughtful type posted, “Let’s show the world that XXX supporters welcome refugees!” he was told in no uncertain terms to fuck off. Some said, “This is a football page, not a political one.” Others were clearly racist bigots that hated all foreigners, and their words were, well, you can imagine. There are ideas, like atheism, and football, that attract a variety of people. So, big news: not all atheists are nice people, and nor does atheism require that they should be. Dictionary atheism is spot-on. If you want to blame some heinous act on some atheist, you really do have to find some cause other than their atheism. It generally isn’t their atheism.

Atheism, as anything like a movement, can include anti-theist racist bigots. That isn’t a problem for atheism as a movement, it’s a problem for humans. All we can do is denounce them when they appear. They are still fully paid up atheists if they don’t believe in gods, even if they want to kill all theists.

… and replacing it with…what? According to Harris, nothing.

With humanism, liberalism. As Harris does.

Remember, Myers is conflating some online anti-feminists with Harris here. Remember here that for Myers, Harris is the target of all this, along with anyone that agrees with him.

… they are so authoritarian that they rush to the defense of their Leaders with a capital “L” no matter how egregiously offensive their bigotry might be, and any who dare to criticize them are “harming the cause”.

No. We tend to leap to their defence because you are so fucking wrong. And what the fuck has ‘authoritarian’ got to do with any of this?

We need purpose and value and meaning as well, and if a prominent Leader of atheism is saying that atheism doesn’t do that, that’s a declaration that atheism is bankrupt, and has failed totally. It has become a Great Nothing.

The people Myers is declaring to be atheist Leaders, ‘L’, don’t take on that leadership willingly. They are merely popular for their writing and appearances, with regard to religion. Myers has been too – though he’s sullied his reputation more than most, without needing to be misrepresented.

When New Atheists talk about theism and atheism, that really is what it’s about. When they debate with theists on the morality that theists claim for their god, the atheists offer humanism, born out of our human biological and cultural history – just as Myers does. So, “It has become a Great Nothing” is just illustrating the fucked up perspective Myers has; his desire to define atheism for others, and to pick up on the straw man that is of his own creating.

That’s not my atheism, though.

We know that. We’ve seen all his twists and turns as he’s tried to fit the square peg in the round hole and wondered why it doesn’t fill it all round. There’s a gap. Because atheism isn’t a social moral systems. Humanism is.

As at least one commenter pointed out, they use the term ‘secular humanist’. Personally, to be a little clearer, I often use ‘atheist secular humanist’. I might even let New Atheist stand for that, because that’s what fits, and that’s how I see the popular New Atheists like Harris and Dawkins – which has to be explained over and over because idiots like Myers, and Greenwald, Aslan, Uygur and others insist on fucking it up with their bullshit.

So, what does Myers think?

I argue that the absence of gods gives greater prominence to the interdependence of the human community, and adds greater weight and urgency to the importance of empathy and equality and all those human values — but if atheism is now a label that allows us to nonchalantly disavow responsibility for the actions of those within our own group, perhaps it’s time to disband the whole idea of an atheist community.

Think of it as a Venn diagram, with a tiny fraction of the human characteristics as expressed by binary membership (in or out) of groups. There’s atheism. There’s humanism. There’s theism. There’s hate filled bigotry. They intersect. We all work in that universe. 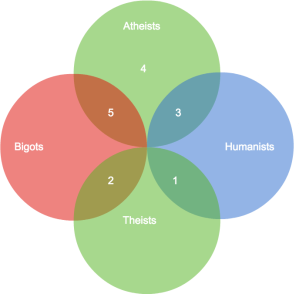 1 – The humanistic values of religion that Myers would like to replace (with what? he asks).

2 – Of course religion has its bigots.

3 – What Myers is really looking for is atheist humanism. He sees it as his social justice atheism, as a thing; but really it’s the intersection of things: atheism and humanism.

4 – Myers seems to think that dictionary atheists, in saying that these killers are not doing it because of their atheism, are claiming that atheism is all this region: 4 is what’s left, when you remove 3.

5 – And some even imply that if you remove the social justice stuff then atheists are nothing but 5.

But what Myers is failing to see is that dictionary atheists, New Atheists, Harris, are pointing out that atheism really is a separate class, distinct but intersecting with humanism and bigotry. That atheists can be humanists, but need not be.

Myers wants atheism to be just 3. But he can’t make it just 3 by simply whining that it should be.

All this is pointed out to Myers. And his response, in the comments (35):

OK. So atheism is totally useless, and means nothing at all. We might as well go back to believing in Odin.

Myers wants his own little Atheism-M empire that he can lead and expand. And he’s been pushing it so ideologically that many people have turned away, or have been kicked out, blocked, for non-conformism.

Of course, Myers got it wrong anyway, in the Mercer case. See more on my post on Ashley Miller, but basically, this:

So, is this about atheism? Is it about Sam Harris? Well, had Myers waited he could have still blamed it on Harris because Harris owns a gun, and all gun owners are mass killers, right?

But this is very inconvenient for those that want to blame it on a sane white atheist. He was mixed race, not entirely rational, suffering the torment of a life with Asperger’s syndrome in the family, and not so much an atheist that it matters – not a raving militant as Myers would have you think of Harris.

So, the two incidents where Myers and others have tried to place the blame on atheists (at least New Atheists) when shooters, Hicks and Mercer killed people, it looks like atheism had little to do with it, if anything at all.